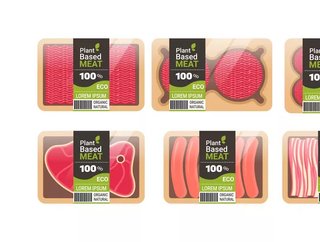 64% of those questioned said they have bought plant-based food items in the last year. The reasons for why, included:

Appinio was founded in 2014, is headquartered in Hamburg and has a revenue of $1mn.

Being plant-based is no longer a trend

Two similar terms here are not to be confused:

A vegan person does not consume anything with animal products in it - at all.

This often extends to toiletries and clothing items - even cash notes. In 2017, The Bank of England came under extreme pressure from vegans to change the new £5 notes, after it was discovered to contain animal fat in the plastic.

A plant-based person might be aiming to eventually become a vegan, but cannot do without one (or two) vital items containing animal products. They are "mostly vegan", with the majority of their diet being fruits, vegetables, nuts and legumes - plant-based.

In the past, veganism was seen as drab and pedantic, sucking the fun out of the lives it claimed to improve.

But slowly, there was an increase in public understanding of the health benefits, the horrendous life of animals bred for slaughter and - perhaps most importantly - the environmental impact of the meat and dairy industries.

In the age of social media, once isolated vegans or plant-based individuals were able to build up a community, organise events, share recipes and spread the benefits of their diet across their digital social circles. Supermarkets picked up on the trend and began offering plant-based products, making it easier for consumers to experiment slowly with a diet void of meat and dairy.

In 2006, Doctor Michael Osterholm warned Oprah Winfrey that the next pandemic was overdue - and that it was likely to come from human contact with animals. While vegans did not celebrate the arrival of COVID-19, market research firm Mintel found that 25% of 21 - 30 year olds felt that the pandemic has made a vegan diet more appealing. Many consumers want to distance themselves from meat, following the outbreak of the virus at a wet food market in Wuhan, China.

“We’ve identified the plant-based and cultured food industry as a key one to monitor consumer behaviour in”, said Jacqueline Junke, UK Market Lead at Appinio. “We’re seeing huge advancements in this area, made evident by the growth opportunities big global food brands are capitalising on and the emergence of many new brands in this space. Combining health and environmental concerns, we were keen to see the attitudes amongst Brits and were not surprised to see such high numbers considering switching parts of their diet to plant-based alternatives, often with the belief it is healthier. It will be interesting to see how quickly these sentiments change and, as people become more educated on the topics, whether they make the decision to change what they purchase and consume on a permanent basis.”

People who have gone plant-based

The idea of giving up cheese horrifies many - but a number of celebrities have made the switch from dairy devotee to plant-based:

The revered chef once claimed to be allergic to vegans, but this year became a spokesperson for Silk, a plant-based dairy brand - although he has been experimenting with plant-based food for years.  Yet Ramsey’s plant-based journey was not inspired for the environment or animal welfare: “From a restaurateur’s point of view, I could see a more creative demand for plant-based cooking. So it keeps chefs on their toes! With the sort of demanding times in my schedule, cutting dairy out of my diet on a day-to-day basis was absolutely crucial.”

The singer has documented her vegan journey on TikTok. After being a vegetarian for years, Lizzo chose to change her diet. “Being plant-based and vegan has been pretty easy except when I am hungover”, the Good As Hell singer explained.

In 2018, Clerks director Kevin Smith suffered a heart attack which almost killed him. In his recovery, Smith was told his high cholesterol was partly to blame. His daughter, Harley Quinn, suggested he follow her on a plant-based diet.

“The nutritionist explained the benefits of a plant-based lifestyle and Harley kind of seized on that moment”, explained Smith. “So I said: Well, I’ve eaten the way I want to eat for 47 years, I will try your way for a couple of months.”

Within half a year, Smith had lost 22kg/50 pounds, his blood pressure normalised and the father-daughter duo started hosting a podcast, Vegan Abattoir.