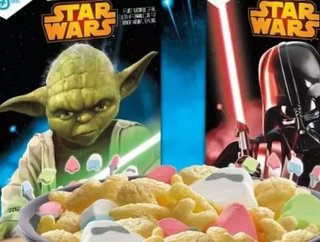 It wasnt so long ago that pop culture touchstones and sugary breakfast cereals or snack foods went hand in hand&mdash;while some still hold a torch for...

It wasn’t so long ago that pop culture touchstones and sugary breakfast cereals or snack foods went hand in hand—while some still hold a torch for Hi-C’s Ecto Cooler, created to tie in with the cartoon The Real Ghostbusters, here at FDF World HQ we still feel pangs of longing for the marshmallow-filled Chex-esque Teenage Mutant Ninja Turtles cereal. (Then there were Urkel-Os, explainable only by the phrase: “it was the 1990s.”) Star Wars has always been a part of this grand tradition, from Kellogg’s C-3PO’s in the 1980s to Star Wars Episode II cereal from General Mills in the 2000s. It’s simple marketing, and it’s infinitely smart and effective—we still think about those cereals to this day, and by default we’re also thinking about the properties those cereals promoted.

As you may know, the Star Wars franchise is back yet again—the seventh entry, Star Wars: The Force Awakens, is currently slated for release this year on December 18. The hype train has already started rolling, and General Mills has once again been tapped to help kick that hype into high gear.

This week—aptly enough on May 4, known to fans as Star Wars Day because “May the 4th be with you”—General Mills announced that the company is launching a special limited edition Star Wars-themed cereal in June 2015. The cereal, which looks like a puffed corn-type base sprinkled with brightly colored stormtrooper and droid-shaped marshmallows, will come in limited edition collectible boxes starting with Yoda and Darth Vader in June. Those will be followed by two alternate boxes in October, and two more in February 2016.

“The ideas stemmed from our team’s desire to bring even more fun to the cereal aisle,” says Alan Cunningham, innovation marketing manager, in the official announcement from General Mills. “Star Wars is as big as it gets and continues to thrive in appeal to fans young and old.”

With Michael Bay’s TMNT series primed for a sequel, and Nickelodeon’s cartoon series still in full effect, maybe it’s finally time to bring back that Ninja Turtles cereal as well?