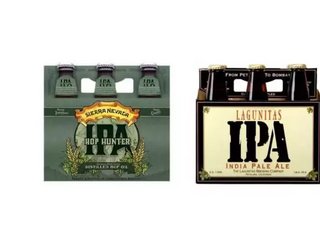 UPDATE:It looks like the case of Lagunitas vs. Sierra Nevada won&#39;t be setting any legal precedents after all, as it is over as quickly as it started...

UPDATE: It looks like the case of Lagunitas vs. Sierra Nevada won't be setting any legal precedents after all, as it is over as quickly as it started. Tonight Lagunitas founder Tony Magee spoke out from the brand's Twitter page, stating that the brewery will be officially dropping the lawsuit Wednesday morning. 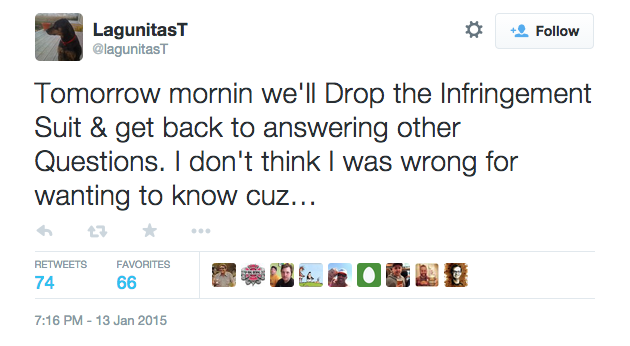 The California craft brewing scene is usually characterized by good-natured cooperation and collaboration, but of course there are always limits. This week finds two of the best brewing companies on the West Coast, Lagunitas Brewing Company and Sierra Nevada Brewing Company, mixed up in a trademark infringement lawsuit over three little letters that California brewers and beer drinkers alike know all too well: IPA.

Specifically, it’s the placement and the font of the term “IPA” that’s causing a mix up with Lagunitas. The complaint, filed by Lagunitas on January 12 with San Francisco’s US District Court, argues that the label for Sierra Nevada’s new Hop Hunter IPA (a new beer brewed with distilled hop oil and scheduled for launch on January 15) is stepping on the toes of the trademarked logo for Lagunitas IPA. As the complaint notes:

“For nearly twenty years, the Lagunitas “IPA” has been using the all-capital, large, bold “IPA” lettering, and the Lagunitas “IPA” Family of Trademarks has become well-known and well-recognized in the craft brew industry, and in the alcoholic beverage industry, generally, as associated with and signifying Lagunitas and the Lagunitas IPA. The unique “IPA” lettering used in the Lagunitas “IPA” Family of Marks has a distinctive serif font, and distinctive kerning, or letter spacing, between the “P” and the “A”, and distinctive elimination of any periods between the letters. In addition, Lagunitas is well-known for using its distinctive “IPA” lettering in a manner that it is the center and focal point of the overall design. The “IPA” lettering also has an aged or weathered look, with uneven areas on each of the letters. The overall effect of these factors (the large, all-capital, bold, black lettering style, the placement with respect to other wording and design elements, and the weathered look) creates a unique, iconic design that is associated with and signifies Lagunitas, and its associated reputation for excellence, in the craft brew industry and among consumers.”

As the trademark holder of this logo, Lagunitas Founder and CEO Tony Magee has declared that the similarities between the Lagunitas IPA logo and the new Sierra Nevada Hop Hunter IPA logo are simply too great, especially the similarities between the six-pack branding for each. Moreover, the difference between this new Sierra Nevada logo and the rest of its lineup only underscores the issue:

“In my opinion, the label and packaging design for the Hop Hunter IPA is a strong departure from the usual Sierra Nevada branding, and the overall effect of the Hop Hunter IPA label and packaging design is to create, and is specifically intended to create, consumer confusion as to the sponsorship, source, or approval of that product with the Lagunitas IPA.” 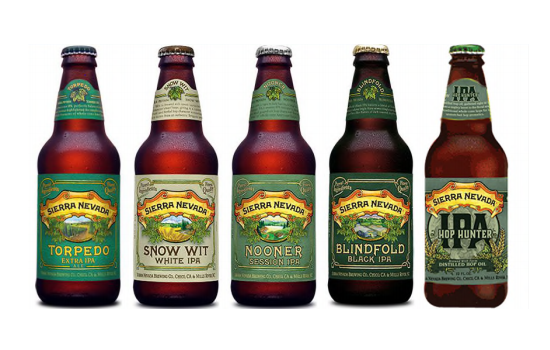 Beer blog BrewBound reached out to Magee, who acknowledged that this isn’t a personal attack that Lagunitas is eager to take on, but a last resort that the beer brand feels it must follow through with to protect its name:

“I wish it wasn’t happening, but wishing does not make it so,” Lagunitas founder Tony Magee told Brewbound. “There are thousands of IPAs in the United States, all of which use those three letters and those brewers have found unique and individual ways to present them.”

But on the other hand why would Sierra Nevada, the largest brewing company in California, want to create consumer confusion in order to draw Lagunitas fans toward their own IPA instead? As a press release issued by Sierra Nevada today states, the brand has a unique new beer on its hands with Hop Hunter IPA and has no intention of being recognized as anyone other than itself:

“We’ve been making IPAs since 1981. Hop Hunter IPA is the latest product in our portfolio, with the bright Sierra Nevada banner prominently displayed across the top of the design, and the beer style underneath—an IPA in this case—so that beer drinkers know exactly what beer they are reaching for. We have no interest in our products being confused with any other brand.”

Just last week, NPR ran a piece on one of the rising side effects of the craft beer boom: legal battles arising from too many breweries and specialty brews and not enough good names between them, leading to disparate breweries with beer names that are all too familiar. This seems like one of the highest profile examples of this issue yet—and the result of the lawsuit either way could set a precedent for how similar cases are handled in the future.