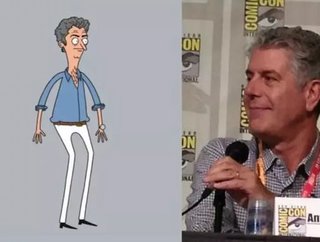 One of our favorite food industry personalities is trying on a new look, and its a pretty great one. Today it was announced that Anthony Bourdain, chef...

One of our favorite food industry personalities is trying on a new look, and it’s a pretty great one. Today it was announced that Anthony Bourdain, chef and currently host of CNN’s Parts Unknown, will be guest starring on the popular Nickelodeon animated show Sanjay and Craig.

On the show, Bourdain—or rather an animated version of Bourdain—will be playing the part of “Anthony Gourmand,” who is on the hunt for the perfect food as host of the show Foodventurer. According to the New York Post where the news broke, the episode will involve Foodventurer fan Sanjay and his pet snake Craig convincing Gourmand to search for that ultimate food in their hometown. Bourdain discussed the role with the Post, and suffice it to say he’s pretty jazzed:

“I’m a mega fan of ‘Sanjay and Craig.’ I’ve seen absolutely every episode,” says Bourdain via e-mail. “This is a show I wish had existed when I was a kid. It has all the elements that I looked for in my childhood for entertainment and was deprived of — stinky stuff, farts, toilet humor, gross stuff. Awesome.”

Bourdain expounded further on the role with Grub Street, discussing his reaction to seeing this new version of himself in action:

As far as his feelings are concerned, Bourdain seems pretty stoked, in his appropriately Bourdain-esque way. "It's a little weird seeing my voice coming out of Anthony Gourmand, but my friends have been telling me that I've been a cartoon of myself for years, so really I'm kind of used to this," he says.

This actually isn’t the first time he’s been an actual cartoon of himself, either – in 2011, he appeared on an episode of The Simpsons along with Chefs Gordon Ramsay and Mario Batali.A year after that he also got more directly involved in the cartoon process by writing the superb dystopian foodie graphic novel Get Jiro! (although he didn't actually appear as a character in that one).

According to reports, the new episode will air early next year. We’re looking forward to seeing how it turns out.